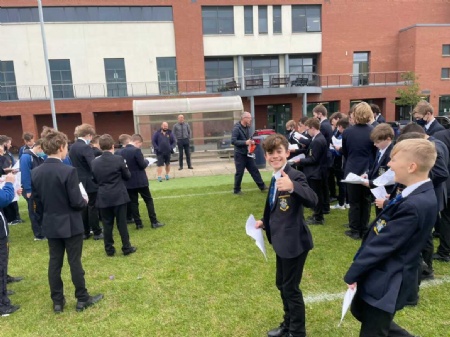 “Taff, I have an idea” this during my military days would have seen me knee deep in snow or mud while trying to create a fine dinning meal in the middle of a field, but not this time, Mr Todd had come up with the idea of Junior School competing in an orienteering challenge for House points.

“No problems” was my reply and Mr Todd came up with the plan and the timings, over three days all three-year groups would complete over a 14-check point course which was just under 2km. Each check point would have a traditional orienteering marker and flag but to add to the challenge there was also a question attached to each point.

The questions seemed to be more challenging than the actual route as many weird and strange answers came back on their answer sheets,

“Who was the war time Prime Minister During WW2”

Answer: Samsung and Goliath or Jesus and the other guy with long hair.

A copy of the questions are attached to see how you would have fared in this challenge.

All three-year groups enjoyed the chance to get out of the classroom and run around in the fresh air and gain some points for their Houses, there was some MIAs, but we believe a few days or weeks living wild in the BGS grounds will do them no harm and make them stronger and more resilient BGS pupils.

Many thanks to Mr Todd for his cunning plan (there will be more in the pipeline we are sure) and all the House Captains, Deputies, Prefects and Senior Boys who took time out of their busy schedules to help supervise the younglings.